The show delivers on its promise to democratize wealth creation by providing transparent access to select pre-IPO opportunities to millions of people around the world.

LOS ANGELES, Aug. 18, 2021 /PRNewswire/ — The groundbreaking business reality series Unicorn Hunters, launched by TransparentBusiness and reality TV icon Craig Plestis (The Masked Singer, I Can See Your Voice), announced today that it has amassed more than 12 million views since premiering on May 10th.

Unicorn Hunters pioneered a new genre — enrichtainment — that combines entertainment with wealth-growth potential for individual investors without barrier to entry. The first five episodes of Unicorn Hunters featured FarUV Technologies, FORTË, Starton Therapeutics, Intrommune Therapeutics, and Carbon Collect Limited, proven scale-ups looking to hit the coveted $1B “unicorn” valuation. To date, they have received more than $45 million in equity requests from investors from around the globe. Episode six will premiere on August 23rd, and the production of the next nine episodes will begin in Los Angeles on August 30th.

“Millions of people have watched our show and the featured companies have raised millions of dollars in capital to scale up their business,” said Alex Konanykhin, CEO of Unicorn Hunters. “Now we are focusing on augmenting our viewership via TV syndication, with the objective of increasing our audience to 25 million people per episode.”

“I am proud to be associated with Unicorn Hunters, a revolutionary show that democratizes investment opportunities and assists fledgling companies helmed by creative entrepreneurs from all walks of life,” said Craig Plestis, executive producer of Unicorn Hunters. “This is a series and a movement not just for America, but for the world and we plan to do more and do better as we move into the future with this visionary program.”

On YouTube alone, Unicorn Hunters’ content has been viewed more than 27 million times, giving companies featured on the show a great deal of visibility on a global platform.

“It has been an incredible honor to be a part of Unicorn Hunters’ groundbreaking show. It has given us access to investors globally and given them access to FORTË’s funding round. Our previous funding round was 200% oversubscribed and we are thrilled to open this current round to the world through Unicorn Hunters,” said Lauren Foundos, Founder and CEO of FORTË. “Not only was I the only female entrepreneur on the show, but I was the only company to get all the judges to commit to investing, which was a surreal and exciting experience to say the least.”

The series will continue its format of one company pitching the Circle of Money, the panel of seven legendary entrepreneurs, luminaries, and business titans in each episode. Returning to the next nine episodes are Steve Wozniak (Co-founder of Apple), Rosie Rios (Former Treasurer of the United States), Lance Bass (artist and investor), Moe Vela (former Director of Administration to Joe Biden), Silvina Moschini (CEO of SheWorks!), and Alex Konanykhin (CEO of TransparentBusiness), along with newcomer John Bercow (Former Speaker of the House of Commons of the United Kingdom).

Episodes one to five of Unicorn Hunters are streaming on-demand now on YouTube, LinkedIn, Facebook, and Vimeo. Episode six premieres on August 23rd. 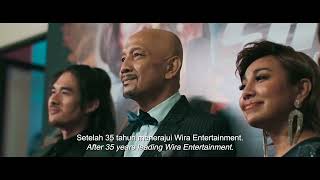 https://youtu.be/JOw4hW-pdeI SINGER and actor, Ning Baizura admits he doesn't mind when offered to play the role of a mother at the age of 46. Ning ... Read More

Korg UK, distributors of Mapex, Paiste and Vic Firth have partnered with Drumaoke hosts and organisers Drumazon, with the return of The UK Drum Show ... Read More