‘RM5.2 million worth of my love for Wawa’ – Aeril Zafrel

ACTOR Aeril Zafrel and his wife Wawa Zainal did not expect their dream of having a new headquarters or home for Wawa Cosmetic to finally come true.

Most impressively, Wisma Wawa Cosmetic located in Bandar Baru Bangi is estimated to be worth RM5.2 million.

Adding sweetly, Aeril himself admitted that the headquarters was a special ‘gift’ for Wawa.

According to Wawa, the headquarters became a ‘witness’ to the hard work of those who have worked hard to ensure that the business continues to thrive and grow.

According to Wawa, the headquarters is a ‘witness’ to the hard work of those who have worked hard to ensure that the business continues to thrive and grow. 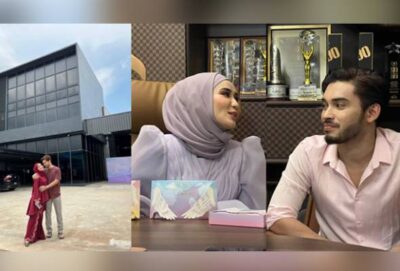 Meanwhile, according to Wawa, the headquarters has become a ‘witness’ to the results of their hard work in ensuring the business continues to thrive and grow.

“Unexpectedly, we finally managed to get this HQ despite many trials and tribulations.

“When we first started doing business, people laughed, insulted, thought we were going to get divorced.

“In the beginning, when we wanted to get married, some people said we would have a hard life.

“In the end, we proved that we can succeed. Those words made Wawa and Aeril strong.

“Wawa is very successful with this success and can’t believe it. Even now, there is a foundation and we can build a mosque later, ”he said.

Wawa and Aeril said this when met at the launch of Wawa Fantasy Dream’s latest product and the opening of the new headquarters, yesterday.

It is understood that a total of 80,000 units of the product will be produced involving 50,000 units for the first ‘batch’.

The 12-day festival will really turn on the jets on Wednesday with the arrival of Tom Cruise THE red carpet is ready for the opening ... Read More