MANY lingered in their minds over the course of the nearly two -hour National Symphony Orchestra (OSK) concert with Star Misha Omar on Saturday night at the Palace of Culture.

An unusual weekend night. A prestigious venue has reopened its doors since the pandemic has been ‘locked’ for so long. Even when the ban on gathering activities and live performances came into force, the loneliness of the stage seemed to be a gloomy symbol of the country’s creative arts industry and its entire active force. 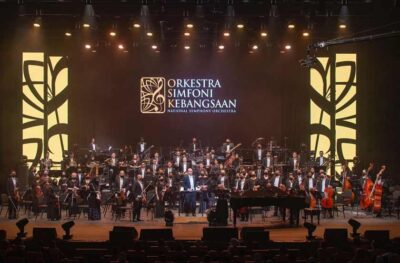 The night was also about the discipline of maintaining standard operating procedures (SOPs). Everyone has not forgotten that in that enclosed space, though vast, every individual is still embraced by an invisible threat.

So, order becomes his shield. Guests who come must pass the requirements of complete vaccination, wear a face mask, use sanitation, check in with MySejahtera, not be too crowded, or stay close for too long. Just calm down.

Congratulations to the Istana Budaya staff who occasionally reprimanded and reminded. If the organization of the time is smooth and controlled, it will definitely be a benchmark for similar events in the future.

Not kidding
While waiting for the stage curtain to be raised, I had a brief glimpse of the pounding of preparations by Misha and his team since the beginning of the ‘music for the people’ project was announced.

“We are not hanging out with anyone arbitrarily for now. Go training and go home. Imagine if one was hit, all would be hurt. Be careful. If you want to hang out, you can, but later you will finish the responsibility of this concert, yes, ”reminded my sister and also Misha’s manager, Mimi Omar, to me during the day during the invitation to meet because cross-country activities and dine-ins were allowed.

Nor was I discouraged when the invitation was rejected, even more respectful and admiring their spirit.
“It’s been a long time since I’ve been on stage for a show, with orchestral music. Get focused first. This is not a joke, ”said Misha, who was willing to temporarily put aside many of his family’s institutional plans for the concert, including the question of wanting to have more children.

Knowing the personality of the woman from Kelantan who is serious about her job, it is not surprising when she returned diligently to ‘go to school’ with Datuk Syafinaz Selamat for a month before the night of the concert.

Watching the woman’s comfortable style dominate the Panggung Sari audience, while showing off a yellow dress designed by Michael Ong and then switching to a bright red Christian Dior dress, remembered for a moment her action over the previous twelve months on Instagram.

While wearing the ‘original ready’ shirt against the backdrop of the house wall, Misha enjoyed shopping, joking, singing, teasing, karaoke and having fun in front of his followers.

“Sessions with followers to remind themselves that they can still sing, and have a career as a singer. It is touching to know that this voice is accepted, able to calm and entertain people, “he said.

Once upon a time we also shared complaints about life being confined during the seasons of past movement restriction orders. Among those he mentioned, he missed the atmosphere of practicing with his mentors.

“The opportunity to gain knowledge and improve oneself is mandatory. This is my career , bang, ”recalled the woman’s expression in our casual conversation session via WhatsApp when COVID-19 was raging earlier this year.

Concert energy
Yes, it was clear that night Misha did not disappoint the 737 fans sitting in padded green chairs at intervals. It is certainly a special reward after a long time of not being served live entertainment, and even after the ‘drama’ of the difficulty of buying tickets with various constraints.

Accompanied by 80 talented music heroes from OSK led by Nasran Nawi, the emotional vibrations published in Misha’s voice bounce lull the listeners into stories about life.

Embroidered with casual chatter between songs, it became an intimate moment in the eyes and ears of his lucky fans. Misha became himself without pretense, and everything felt so close.

Among the moments that are remembered, apart from the arrangement of popular songs, is a segment with Datuk Ramli MS which is a special tribute to commemorate the late Datuk Sudirman Hj. Arshad, the late Datuk Sharifah Aini and the late Siti Sarah Raissuddin.

There was a glaze that flowed from the stage to the audience seats.
Misha’s trademark on stage is concise but precise. Without having to be bothered by excessive decorative props, gimmick surprises or even background dancers, the only elements on sale are its elegant appearance, the voice that penetrates the heart, the light play of mood triggers and the synergy of musical luxury.

Although occasional awkwardness was detected on the visual screen display and there were times when Misha’s vocals were a bit immersed in the noise of the music, admittedly it was still minimal, even ignored by the audience without tainted satisfaction. 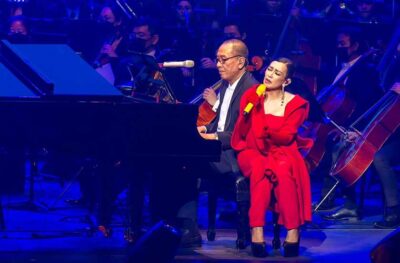 Son of art
Nur Hazwin Roslan, 31, admitted that he was excited and really longed to perform live in front of the audience.
“ Happy is very able to get back together with other members and make a presentation. This is the first in front of the audience since the pandemic hit, “said the violinist who has been in the OSK family for six years.

The story goes, since the pandemic started, he just continued training at home, playing instruments so that his hand muscle memory continued to function, accepting assignments and making recordings for transmission on OSK media.

Add to that the full-time musician, hearing cheers from a full-house stage was an incredible feeling.
“I hope the music industry is allowed to operate as normal, besides hoping that people like us get the attention and help from the relevant parties so that we can survive,” he said, expressing sympathy for fellow freelance musicians who suffered different fates.

Apparently, Misha’s tears and Nur Hazwin’s hopes at the end of the concert brought 1,001 meanings that represented the overall sentiments of the children of art.

“It’s been a long time since I’ve felt the atmosphere coming to a concert, right? Miss all this. It’s fun to see artists and musicians get back jobs like this. I hope there will be a lot after this, ”said someone I overheard in the foyer of Istana Budaya.

Indeed that is actually the humanitarian purpose behind the injection of funds and initiatives, which are understood, channeled by the Ministry of Tourism, Arts and Culture (MOTAC).

Apart from wanting to re -cultivate the appreciation of art among the people, organizing such a concert is like a ray of light for those involved.

The rays are abundant – on singers, musicians, sound engineers, lighting designers, stage technicians, makeup artists, stylists, multimedia operators to the stage ‘tauke’ – to share their fortunes and return to feel proud of how valuable their talents, skills and existence are. .

In the hope that the threat of the corona virus finds its point already, and the world recovers for as many job opportunities, it turns out that the titles of Misha Omar’s songs intersect in my mind.

Until When does this pandemic affect and change the pace of our lives? Will there be a sense of Unwillingness to continue to adhere to health protocols? Will there be no more cries for all art activists who have been vacuuming income opportunities for so long? In the dark and suffocating tunnel of uncertainty, where is the Breath of Light ?

PU Riz left special messages and quotes for his son to become a pious child.

From Jazz World To Reality TV All Together Now Malaysia 2021

Kuala Lumpur - Khairun Daud's name may be a bit foreign and unknown perhaps for local jazz music fans but Kirana Kay's name is no ... Read More

LOS ANGELES, Dec. 15, 2021 /PRNewswire/ -- An all-star cast from the worlds of music, TV, film and comedy have come together to honor George ... Read More