KUASA bulge twists, unravel the dark side of film production

DIFFERENT from the drama that highlights the story of a typical corporate business, the Astro Originals drama, POWER highlights its diversity by revealing the story of the ins and outs of film production.

This 10 -episode premium series for the first time features the fictional story of an influential family in an entertainment world that lives full of glamor, fame, greed for power and betrayal.

Interestingly, this premium drama series is the result of a collaboration between two blockbuster film producers in the Malaysian film industry, Astro Shaw and Skop Productions.

Not only did they dominate the silver screen stage, the two also explored the Astro First platform by publishing Religious Riders 1 & 2; and to further expand joint power, is now pioneering premium drama series.

#2 The Story of Datuk Yusof Haslam’s Family -Like Film Production?

KUASA tells the story of a family of a leading publisher who is very influential and lives in splendor, with three children who will inherit his legacy.

Each member of the family has their own agenda in order to dominate the empire.

Looking at the background of this story, it seems like the family of Skop Productions producer, Datuk Yusof Haslam.

The similarity is when the father and his three children are involved in art and film. Even her children also consisted of two boys and a girl.

In fact, Yusof Haslam himself in a previous statement admitted that there are similarities when viewed at a glance. Yet denies it revolves around his family’s life entirely.

In POWER, the audience will see each actor stand out with their respective characters.

Among them, Nazim Othman who gave a twist in his acting this time when the antagonistic character brought more greatness in different dimensions.

Meanwhile, viewers can also see after a long time, Ning Baizura appeared on television to enliven the entertainment industry.

Even though she carried the character of a mother, Ning was no less self-effacing in her own way.

The other actors are no less impressive, each taking the opportunity to act in this premium drama series.

Not only that, there will be a surprise when a famous artist of the country will appear to intensify this drama.

#4 Every Episode Makes It Uncomfortable To Sit!

The drama is indeed close to the audience as it tells the story of family in one of its scenes there will definitely be similarities in your family.

Only the story is more focused on an influential family in an entertainment world that lives full of glamor, fame, greed for power and betrayal.

Even though there are only 10 episodes, but viewers are definitely not happy to sit back and look forward to the next episode every week.

This is because each episode of his character will change so that the audience finds it difficult to anticipate who is actually the mastermind among them.

KUASA tells the story of a well -known man in the entertainment industry, Tan Sri Dhameer.

For 35 years in the industry, he has built the largest empire spanning from producing local films as well as investment platforms.

This premium drama series tells the story of his family and his three children, Delilah, Darius and Dharma, who vie to be the sole heirs of his company.

Tan Sri Dhameer tries to educate his children that there is a far bigger enemy they need to overcome than their own families.

Will he succeed? Was that greed going to be the cause of the fall of his empire? Does blood mean more than money?

Watch KUASA which will be shown on Astro Citra channel at 9.00 pm, starting 11 April. 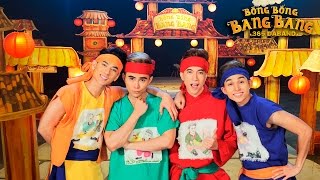 Chris Rock shut down anti-Will Smith comments at his comedy show on Thursday (31.03.22). The 57-year-old comic returned to ‘The Wilbur’ in Boston for another ... Read More

NEWER POSTMany stumbled upon the lyrics of ‘Dengarkanlah’, here are 5 facts about it
OLDER POSTCaprice seeks chicken trader to ‘pay summons to use children’s shirt money’