KUALA LUMPUR — Popular Malaysian Composer Manan Ngah has published “Muzik Adalah Harta” memoir that shares his journey in music. Manan Ngah is a well known composer in Malaysia and has contributed immensely to the music industry.

In an interview, he said that music is an element and influence that is easily close in your heart and living environment even if your career is not as a musician.

“You want to know more about the world of music, especially the role of individuals involved behind the scenes of making and performing music that people have contributed over the years.

“Behind a musician, there is a person who is instrumental to craft words and express of feelings that can be shaped into the rhythm of a song.” he said.

To provide reference in music, the book was published as it will be a tool of guidance, knowledge and inspiration for others.

By reading his memoir, the presentation concept of music and its contents is not solely for music lovers, musicians but also suitable for anyone interested to learn more about music and even as for general readers.

“However, it will be an advantage if you are a musician as our frequency and music tone are at the same length.

“Generally speaking, it will be my personal memoir to share and inspire others who are interested in pursuing a career in the music industry.” he added.

During his high school days, he joined pop music groups and even started as an acoustic guitar player, a simple music sharing session with friends and roommates. Thereafter, he turned as a full-time musician joining the Brain Connection group formed in his hometown Terengganu in the early 80s.

Having released an album with the hit song ‘Aku Dan Kenangan’, song written by the late composer Ahmat Sharif, Brain Connection has made its own history when it became the first music group from Terengganu to produce a complete album (10 song titles including bonus tracks) which was once promoted back then.

In 1982, after migrating to Kuala Lumpur, he joined other music groups including as a combo musician and RTM orchestra.
Manan changed direction to expand further his involvement in the music industry by creating his own composition and gradually stepping up to be album producer for popular and upcoming singers in Malaysia, a journey which started in late 1984.

Participating in the international music fraternity was also part of Manan Ngah’s hallmark achievements.
Over the years, he has been in silo but worked diligently to compose popular songs for singers and musicians.

At present he provides consultancy services in producing theme songs and managing events for corporate bodies, institutions, government agencies including schools and universities.
He also shares his views, ideas, knowledge and thoughts on music composition on his Youtube page “Manan Ngah”.

Manan welcomes all walks of life who are interested in music to follow his youtube channel, read his memoir and drop a message to learn more about the journey of the music industry.

For those of you who has FB account, you may send text to Manan’s message box for his book or music related business and enquiry. 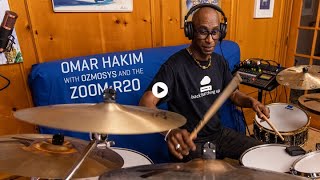 Zoom is excited to introduce the new R20 Multi-Track Recorder. With a familiar touchscreen interface, the R20 makes it insanely simple to track, edit and ... Read More